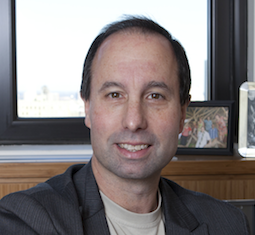 Michael N Shadlen an Investigator of the Howard Hughes Medical Research Institute and Professor of Neuroscience at Columbia University.  He is a member of the Mortimer B. Zuckerman Mind Brain Behavior Institute and the Kavli Institute of Brain Science. Dr. Shadlen obtained his undergraduate and medical degrees at Brown University, his PhD at UC Berkeley with Ralph Freeman. He trained in clinical neurology at Stanford University and to the lab as a postdoctoral fellow with William  T. Newsome. He then joined the Department of Physiology & Biophysics at the University of Washington, where he remained until 2012. His research focuses primarily on the neural mechanisms that underlie decision making. He is also a neurologist and a jazz guitarist. He received the Alden Spencer Prize, the Golden Brain, and he is a member of the National Academy of Medicine.


Research. Michael Shadlen studies neurons in the association cortex that process information from the visual cortex to give rise to interpretations, decisions, and plans for behavior. His experiments combine electrophysiology, behavioral and computational methods to advance our knowledge of higher brain function.


Research in the Shadlen lab aims to elucidate neural mechanisms that support normal cognitive operations involved in decision making: (i) inference from evidence, (ii) the tradeoff between decision speed and accuracy, (iii) the assignment of confidence in a decision, and (iv) the capacity to combine and weigh evidence of varying degrees of reliability. Our emerging understanding of these mechanisms provide a window on wider aspects of higher brain function, such as reasoning, planning, strategizing and vacillating.  Shadlen believes that such mechanisms hold the secret to what makes a normal brain “not confused.” Moreover, these same mechanisms are likely to constitute important “failure modes” that underlie a variety of cognitive disorders—that is, the translation of a diverse array of etiologies to the expression of cognitive dysfunction. Thus, he expects that in the not too distant future we may manipulate and restore these basic mechanisms to treat brain disorders affecting a wide range of higher cognitive functions affecting personality, ideation, volition, awareness and decision making.


Q.) Please discuss on of the most interesting findings/ideas from your research .


Dr Shadlen > There are several, but I find it interesting how often time—the passage of time, elapsed time, anticipation and the like—must be considered to understand cognitive function. In part, this is because the emergence of cognitive functions, including decision-making, rest on a kind of freedom from immediacy. The freedom is from the sensory demands of keeping up with a changing world and motor demands, that is, the engineering problem of controlling our body musculature in real time. This freedom comes at a price. The brain must establish its own temporal expectations and timing of action. Interestingly, neurons that play a role in decision making also carry signals related to time: e.g., by now something should have happened. More recently, in our work on confidence, Roozbeh Kiani and I came across an unexpected role for deiberation-time. As time passes, the brain infers that an amount of evidence is less reliable. In other words, if the cumulative evidence bearing on a decision has not meandered too far from neutral, it is likely coming from a less reliable source, leading to the expectation that the decision is less likely to be correct (i.e., low confidence). We did not expect elapsed decision time to play a role in assigning confidence in a decision. Yet it turns out to have fascinating implications for many related neural computations that rely on probability and prediction.

Q.). What do you think are important issues in Cognition and related areas?


Dr. Shadlen> There are too many unknowns to elaborate them one by one. I think an important general issue is that we are too focused on the representation of information. The field seems to believe that a neural representation of something is the basis of perception or knowledge of that something. We invent all kinds of unnecessary concepts and problems because, as it turns out, it’s perfectly obvious that representation is neither sufficient nor informative about the key mechanisms. For example, we invent attention as the reason the representation of a gorilla among ball players goes undetected and think that enhancing the representation of the gorilla must be the mechanism. We (the field, that is) invent combinatorial challenges because the elements of representation seem difficult to bind together as objects. And we invent magical incantations to elevate representations to perceptual awareness (e.g., oscillations, synchrony, mysterious dynamical interactions and ignitions). We need to think of the brain as a device that decides on what to do, what problem to solve, where to explore, which strategy to apply. In other words a brain that is constantly evaluating hypotheses and propositions—assembling evidence as if making a decision. It’s the getting the answer to questions that is the stuff of cognition, not processing and processing more processing and then labeling the representation.

Another challenge worth mentioning is to understand how the outcome of a neural computation leads to a change in the state of another circuit: its effective connectivity, perhaps its activation in the first place, its settings. We know a lot about information processing but very little about how circuits tell each other to use this value and not that one when setting a threshold or baseline, etc. Cognitive psychologists refer to this as “controlling” as opposed to “processing”. The neurobiology of controlling, what I call the circuit configuration problem, is worthy of a lot of thought. I think its solution is likely to involve the cortical layer 1, matrix thalamus, long range feedback, cortico-subcortical pathways, neuropeptides (I could go on). I think it will turn out to be the basis of the BOLD signal too. That’s an optimistic speculation because it would mean that many cognitive neuroscientists are already studying circuit configuration.


Q.) How did you get interested in the research you love doing?


Dr. Shadlen> Too long a story, but I had a great mentor, Bill Newsome, who saw where we were going long before I did. Bill conducted beautiful studies that linked the activity of sensory neurons to perceptual limits. He did this in a very quantitative way, relating signal-to-noise measurements of neurons (in monkeys) to signal-to-noise in behavior (i.e., error rates as a function of difficulty). The linking idea required a model of the decision process, and we realized that this might be tractable at the level of neural recording. So my branch of cognitive neuroscience is a direct descendent of visual neuroscience and psychophysics. As a neurologist, I lament the fact that we do not know what it is about normal brain function that makes us “not confused”. I believe answering that question will lead to an understanding of principles of cognitive neuroscience, which will turn out to be modes of failure in a variety of diseases that affect cognition, such as schizophrenia, autism, dementia, and so on. I believe that understanding the mechanism of simple perceptual decisions—at the of systems and circuits level—will hold the key to treating these disorders one day.


Dr. Shadlen> Question authority. Read Merleau-Ponty and Ernst Mayr. Learn your math(s) but shun—or at least don’t admire—complexity and the dangerous assumption that existent mechanism must be optimal with respect to obvious desiderata (e.g., efficiency, energetics). Entertain and cultivate iconoclastic ideas, but be prepared to drop them when the data prove you wrong. Do experiments and keep your eyes open for the unexpected.

(As sent to Sumitava Mukherjee in August 2014)