Freelance writer, lecturer and broadcaster, and a Visiting Professor at the University of Plymouth 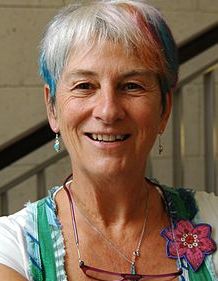 Dr. Susan Blackmore's research interests include memes, evolutionary theory, consciousness, and meditation. She practices Zen, campaigns for drug legalization and plays in her village samba band, Crooked Tempo. Dr. Susan Blackmore  studied psychology and physiology from Oxford University (1973) an MSc and a PhD in parapsychology from the University of Surrey (1980). She no longer works on the paranormal.


Sue Blackmore writes for several magazines and newspapers, blogs for the Guardian newspaper and Psychology Today, and is a frequent contributor and presenter on radio and television. She is author of over sixty academic articles, about eighty book contributions, and many book reviews. Her books include Dying to Live(on near-death experiences, 1993), In Search of the Light (autobiography, 1996),Test Your Psychic Powers (with Adam Hart-Davis, 1997), The Meme Machine (1999), Conversations on Consciousness (2005), Zen and the Art of Consciousness (2011) and Consciousness: An Introduction (a textbook, new editions 2010 and 2011). Her work has been translated into more than 20 other languages.


Q.)  Please discuss the interesting findings from your research


Dr. Blackmore> As a student I was completely convinced of the reality of ESP (telepathy, clairvoyance, precognition) and of souls, spirits and life after death. I wanted to prove all this to the scientific establishment and so began many years of research. To cut a long story short, I never found any convincing evidence of any of these phenomena. I came to the conclusion that they almost certainly (one cannot be sure) do not exist. So how do we explain things like out-of-body experiences, lucid dreams, or alien abduction experiences? It turns out that alien abductions are usually caused by sleep paralysis, and we now understand out-of-body experiences very well - nothing leaves the body, they result from distortions of the brain's image of the body. Since then I have been concerned more with memes (the way culture evolves as a Darwinian process) and the effects of meditation. I have been practising Zen for more than 30 years and I think this helps me think about the nature of mind and consciousness.


Q.) What do you think are important issues in Cognition and related areas?


Dr. Blackmore> I'm not sure how 'important' it is, but the most fascinating to me is the mystery of consciousness. How is it possible that a solid, objective, visible structure like the human brain, made of trillions of neurons and other cells, can be related to this lived experience of being conscious. Note that I say 'related' because I want to avoid saying 'gives rise to' or 'produces' because they cannot be right either. It seems to most of us that 'I' am a conscious being having a stream of experiences and yet surely brain and mind are not two separate things. One day we will laugh at today's confusion over consciousness but for now it's the greatest mystery facing neuroscience.


Q.) what would be the research that you are happy that you did it ?


Dr. Blackmore> The first ever experiment on what is now called 'change blindness'. With a student we showed that if you move a picture very slightly and make a change in the picture while it moves, most people do not notice the change. This odd phenomenon has received a lot of attention in the fields of perception and consciousness studies. The paper is at Blackmore,S.J., Brelstaff,G., Nelson, K. and Troscianko,T. 1995 Is the richness of our visual world an illusion? Transsaccadic memory for complex scenes. Perception, 24, 1075-1081c


Q.) Is there some research you are sad that you did it?


Dr. Blackmore> There is no research that I wish I hadn't done. Even the most disastrous research usually has something to teach you - even if that's never to do it again! But if I had to choose I would say that I am very sad remembering my research into ESP in the ganzfeld. When I was unable to find the same positive results that others were claiming, I went to visit my friend Carl Sargent who was claiming very exciting results in Cambridge. After several days I found evidence that he was cheating and this was the most upsetting experience I can remember. My report of this is here Blackmore,S.J. 1987a A report of a visit to Carl Sargent's laboratory Journal of the Society for Psychical Research 54 186-198. A note on the Sargent affair. Responses were published in the same journal from Sargent “Sceptical fairytales from Bristol” and Harley and Matthews “Cheating, psi and the appliance of science: a reply to Blackmore”.


Q.) You said in 2014 (Edge) that the neural correlates of consciousness is a dead question, so what would be your recommendation to thousands of new students each year who embark on the study of consciousness?


Dr. Blackmore> Keep looking for the Neural Correlated of Consciousness (NCC) if you want to. I believe this research will turn up all sorts of important knowledge about how the brain works. I just do not think it will produce what are classically thought to be NCCs


Dr. Blackmore>> It is all in the PREFACE


Dr. Blackmore> Pursue the questions that drive you personally to find answers. Don't do research you think is popular, or trendy or will be easy to publish. Find your own way. Research is tough. It is only when you really, really want to find out something that you will do your best work.

(As sent to Sumitava Mukherjee in July 2014)